xQc – The “King of Twitch” gambles at Stake Casino

The Canadian streamer xQc came to fame playing Overwatch. A top level pro esports player, xQc, whose real name is Felix Lengyel, became synonymous with the game and even changed his name to xQcOW. Although he’s no longer active in that circle, he still remains one of the hottest streamers. Recently, he’s taken his passion for gambling to a new level by doing casino streams at Stake.

With well over 10 million followers on Twitch, xQc also has the title of King of Twitch. His followers will know that his streams are packed with his online gaming, gambling, and high energy personality. As one of the biggest influencers, xQc has an estimated net worth of $25 million, which is significantly more than other top level streamers like Adin Ross. Originally from Canada, xQc lived in Texas for a few years before moving back up north. We cover xQc streams and other details here.

Which casino does xQc play at?

xQc is now officially a casino streamer, and his casino of choice is Stake Casino. Leaks show that it was fellow streamer Trainwrecks who pointed xQc in this direction, and we are sure glad he did. Stake is of course one of the top crypto casinos right now, offering a huge stash of games. It’s a very high roller friendly place and there are many other high profile streamers and celebs like Drake over at this gambling site.

Felix Lengyel spins a lot of slots on his casino streams. Reels like Buffalo King, Book of Shadows and the Dog House that are known to be high volatility games are frequent numbers on his playlist. He’s also known for card games like blackjack with flirty moments with live dealers. Of course, xQc is not going to let crypto games go either, and he’s also known to play a lot of Plinko at Stake as well. In short, xQc games everything.

Attentive viewers on xQc streams will notice he’s playing with really high bets. Some of these are higher than the usual bet limits. Where most games have a max bet size of $100, Felix can sometimes be seen laying it on thick with $700 bets. We’re guessing it won’t be wrong to assume he has a deal with Stake Casino that includes opening up some of these doors for him. 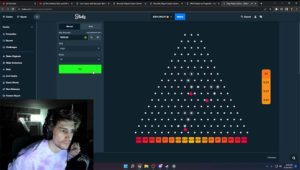 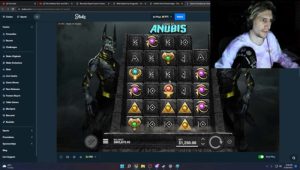 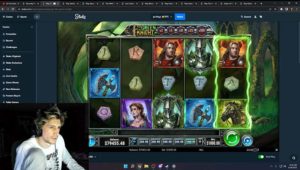 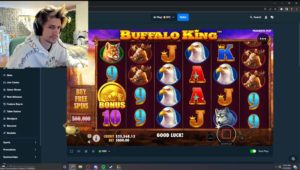 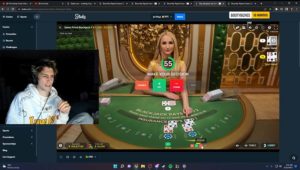 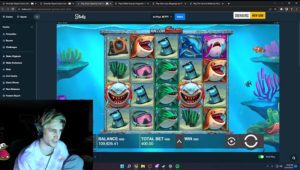 Where and when does xQc stream?

Twitch is really the place to be for streamers to be nowadays, and it’s no exception for xQc. He’s on often enough, almost on a daily basis starting in the evenings. Lengyel does long sessions too, with most streams going for 10 hours or longer. Even the short ones are 6 hours. So although there’s no schedule posted, it’s not too difficult to catch xQc live. And if you don’t manage it live, you can easily watch the recordings.

There’s a good mix of casino games, chatting, slots, and CS:GO shootouts in his streams so there’s something for everyone.

©twitch.tv/xqc | xQc plays a huge range of different games and often streams for many hours. It seems like he is spending more time online than in the real world.

What’s so special about Felix Lengyel?

Felix Lengyel shot to fame for being a pro Overwatch player when he was a teenager. But like with other gamers, he’s been playing esports like GTA since forever. It was however with Overwatch that his talent really shone through. In 2017 at the Overwatch World Cup, xQc was named MVP, and he and the game practically became one. So much to the extent that Felix changed his alias from xQc to xQcOW, with OW referencing Overwatch of course.

©xQcOW Highlights at Youtube | xQc winning his MVP title at the Overwatch World Cup in 2017.

But the hot headed lad got into trouble with the Overwatch community, with accusations for racist and homophobic remarks. He eventually left Overwatch and is now just xQc without the OW. Nowadays, and after a couple of Twitch bans, Felix seems a bit tamer in his streams, although you can certainly still feel his unique energy.

xQc moved to Texas and lived there for a few years. However, after being victim to several doxxing incidents with SWAT teams showing up at his door, he decided that enough was enough and moved back to Canada recently. Understandably, no one knows where he really lives. 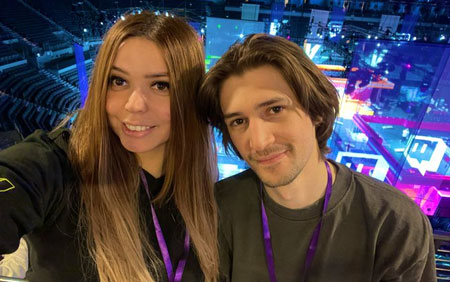 ©twitter.com/adeptthebest | xQc and his girlfriend Adept

Underneath the crazy energy called xQc is a pretty family oriented guy. His mother and his brother Nick have appeared a few times in his social media posts, and he’s in a relationship with AdepttheBest, an influencer and Overwatch player herself. There are often selfies of them together.

They broke up for a while, but as of Fall 2021, it seems the couple is back together. He’s even had a post saying he took the day off to have dinner with his mom and Adept, because that’s fam. So we’d say it’s pretty serious, although no dates for wedding bells have been announced yet.

As one of the most popular streamers in town, Felix is all over social media. It builds a community between fans and it’s a great way to see what xQc is up to. Other than Twitch, xQc is pretty active on Twitter, Tiktok and Instagram. Here are his main channels.

Counting more than 10.8 million subscribers, Twitch is xQc’s homebase. Far exceeding subscriber numbers from other top streamers, this is definitely where xQc is king. There’s plenty of voracious gambling on xQc streams, but he also loves his dose of esports like Call of Duty. He calls himself the juicer because everything he does is awesome. xQc live streams usually get about 70k viewers, so it’s a really great place to hang out, chat, and share the energy. His streams are available to watch as recordings with no subscriptions required, so that’s always an option too.

And just in case there’s any confusion, his Twitch channel used to be called xQcOW, but since he left Overwatch, it’s just xQc again. That makes sense, because he is so much more than just one game.
xQcOW on Youtube

So over at Youtube, Felix Lengyel still goes by xQcOW, and it’s divided into 3 channels: xQc Reacts, xQc Clips, and xQc Gaming. The last one, xQc Gaming has 87.4k subscribers and is by far the most popular, followed by xQc clips.

There’s a variety of content on xQc’s Youtube, from game highlights, to Reddit recaps, to his meme compilations. If you’re specifically looking for his casino stuff, then you’ll find it’s mostly under xQc Gaming. 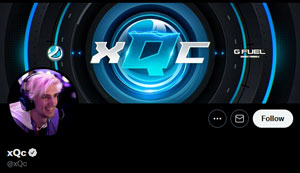 xQc tweets really frequently and unlike other celebs who mostly use the platform to announce professional news, xQc Twitter is full of the streamer’s personal stuff. Like showing his new home back in Canada that this brother Nick helped him set up, to his girlfriend Adept, to his esports, there’s plenty here that his 1.3 million followers can catch up on. So if you want to find some personal facts about Felix, Twitter is a really good place to look for.

Whereas xQc is very active on Twitter posting all sorts of stuff that’s happening in his life, xQc isn’t very active on Instagram. He has a relatively modest following of 440k, who get to see plenty of selfies of the streamer. Occasionally there are also pics with Adept, his family, as well as with dogs and cats. He’s clearly an animal lover. 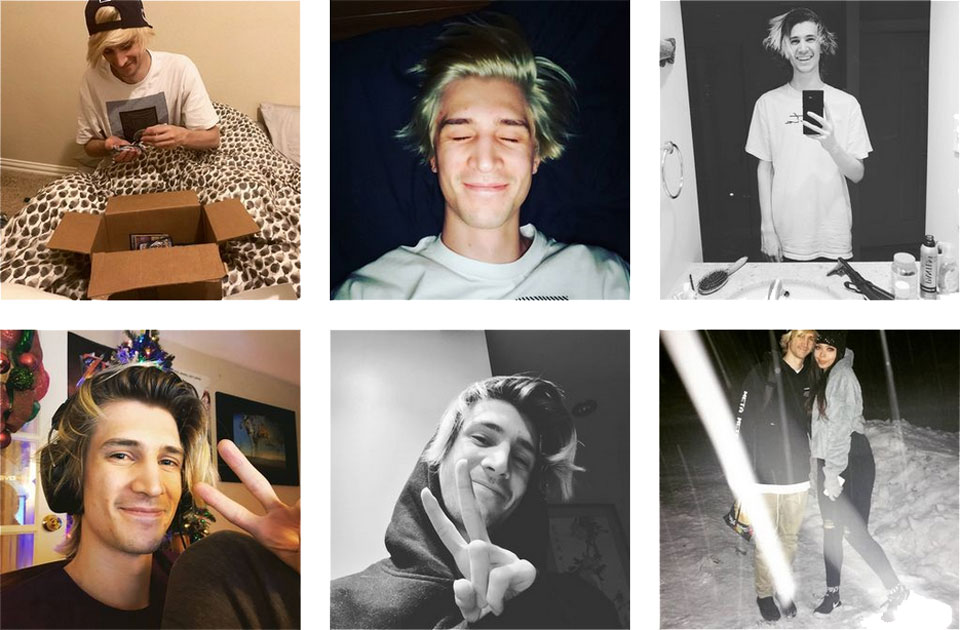 As the name suggests, xQc posts daily on TikTok. Again, there’s a mix of content like challenges, memes, and gaming, although not so much casino. For now xQc TikTok has 408.6k subscribers, but we can see this number growing steadily given the awesome videos everyday.

Felix Lengyel, aka xQc, is one of the most popular streamers who’s well known for his esports accomplishments. Although he’s best known for Overwatch, gaming is life for this Canadian and he takes the same ruthless attitude with him into casino games. He’s an absolute riot.

xQc has been streaming for a long time, and whether it’s slots or CS:GO, or just chatting, he certainly knows how to keep everyone entertained.