Next to Roshtein on the list of top casino streamers is Xposed. Behind the screen is actually a young man by the name of Cody Burnett. Having grown up playing computer games and Call of Duty, adding slots and live games to his gaming menu in 2017 was just the next natural step. Since then, he has become quite the streamer phenomenon.

Xposed is known for his lively and open personality. Offline, Cody is living happily in his hometown in Ontario, Canada with his high school sweetheart and fiancée Shania, their son Linkin, and their dog. Online, Xposed has around 450,000 followers on Twitch. Funny and high energy, Xposed is as much a great entertainer as player. Xposed is a high roller and putting down $10 or more a bet is normal. He’s now managed to turn casino streaming into a career to support his little family, and it’s easy to see why he’s such a happy guy.

Which Casinos does Xposed play at?

First Xposed played at different online casinos. Then he had a exclusive sponsorship with Roobet Casino. Now he plays at Stake. Stake is the biggest crypto casino in the market and offers some exclusive games. While it’s a licensed casino and a great place to play, Stake is a cryptocasino and if you don’t have any cryptocurrency to your name, you’re just not going to get very far there.

These casinos listed have new player bonuses to help you get started. Roobet doesn’t have a welcome bonus, but it does have a strong reward program and other regular promotions.

Cody Burnett actually grew up playing computer and video games, and is a well accomplished Call of Duty player. His passion for gaming in general translates well into the casino realm, and as Xposed the casino streamer, Cody plays a good variety of games. You’ll find Xposed rocking out to different slots and live games. Being a high roller, high variance slots like The Dog House are of course on his favourites list. Of course, Crazy Time, in which he scored one of his biggest wins is also a favourite. Here are some of the games you’ll see Xposed playing: 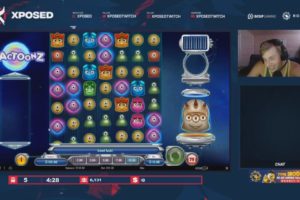 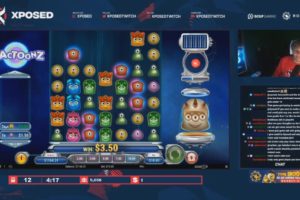 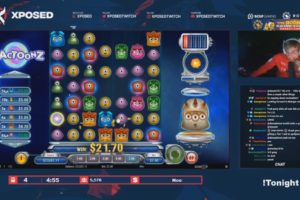 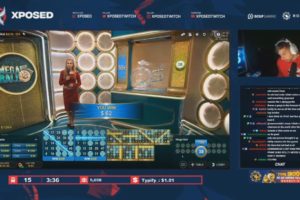 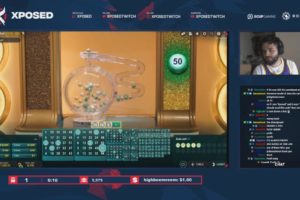 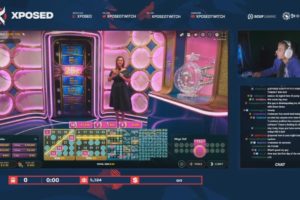 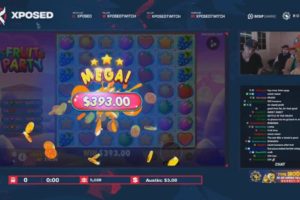 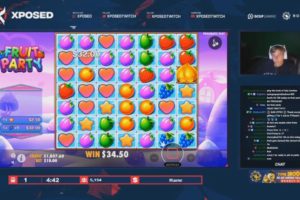 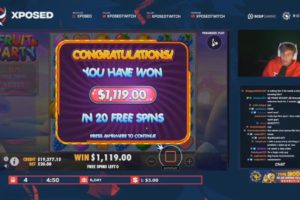 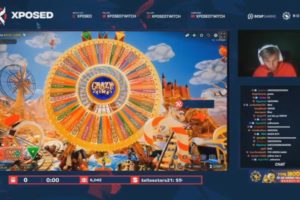 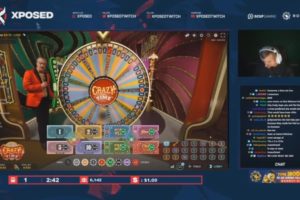 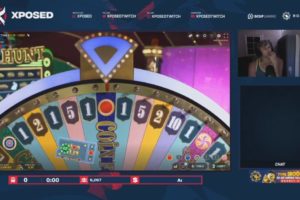 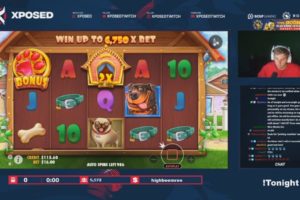 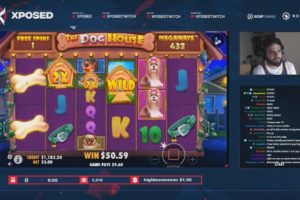 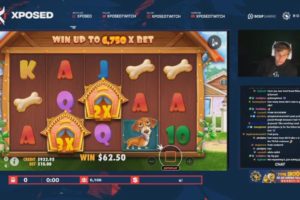 If you go to the casinos listed on this page you can play all these slots in demo mode. The live games are only available for real money play, but you can play Mega Ball for free in a hyper realistic 3D simulation before you go into live mode.

Where and When does Xposed Stream?

Like with all top casino streamers, you will easily find Xposed on Twitch. He takes his job seriously and you will find him streaming on most days of the week. Lately, the streams have been starting in the evening around 10pm, Canadian EST time and can go into the wee hours of the morning. Xposed is very consistent, but understandably the exact start times can vary by a couple of hours. Check the schedule posted on his Twitch profile to be sure. He’s pretty good about updating it so his fans know when he’s on.

Many recordings of Xposed streams are uploaded to his Youtube. Although not as exciting as the live stream itself, it can still be fun to jump around the highlights of each session, which are typically 5 to 7 hours long.

It takes more than gambling skills to be a successful casino streamer, you also need personality. Xposed excels at this and he’s a funny guy and a natural entertainer. Full of energy, Xposed is always chatting with his viewers in his streams. Everyone gets to share the adrenaline ride in his gaming as his emotions simply pour out with his high stakes, riotous wins, and sometimes losses.

Although he has reached celebrity status as a high rolling casino player, Xposed is really down to earth and lives an open book kind of life. These qualities are clear in his stream and are part of his charm. 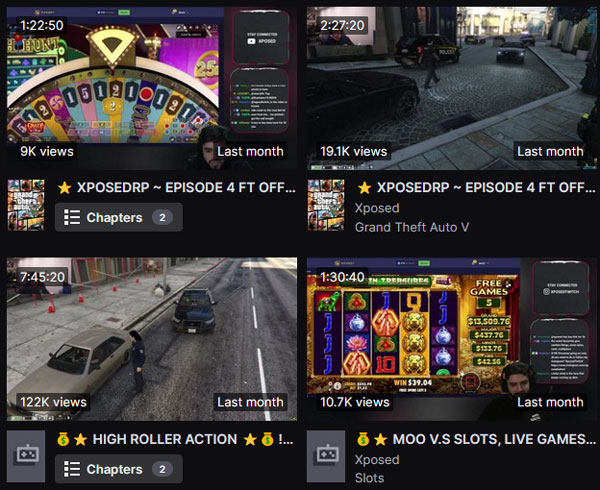 ©twitch.tv/xposed/ | Although we know Xposed as a casino streamer, he likes to play inbetween one or another computer game.

Cody Burnett broke into the world of online gaming with Call of Duty player when he was just 8 years old. He’s still an avid player and can often be found playing Fortnite when he’s not on Twitch. By the time he started playing slots, he had over a decade of experience. Coming from MMORPG games, streaming while playing is basically second nature and you can see that Xposed is very comfortable being himself in from of the camera.

When he first started streaming slots, he was putting down a few dollars to $10 a bet. This is a bit higher than what most people will play but it’s not unimaginably high. Even with these modest bets, Xposed managed to reel in significant wins in the thousands, which only testifies to his skills. As he managed to accumulate more capital, his stakes are now higher and he’s a happy high roller.

Being a gamer at heart, Cody B loves a wide variety of games. Other than slots he was quick to pick up the innovative live game shows like Crazy Time and Monopoly Live from Evolution Gaming. This paid off, especially when he made a killing playing Crazy Time, pocketing a cool half a million dollars thanks to a massive multiplier.

Are the High Stakes Fake?

Since he got famous as a streamer, Xposed has had some partnerships with online casinos such as Roobet or now Stake. There’s been questions whether this is fake or legal. The answer is that in the case of Roobet, the casino gives Xposed a bankroll and he gets to keep a percentage of the wins. So although it’s not coming from Cody B’s savings account, it’s not fake money either because he can withdraw the winnings.

©twitch.tv/team/xposers | Thanks to the Xposers, you can have nearly 24/7 casino streaming on the Xposed Twitch Account.

Being a generous guy, Xposed is happy to share the spotlight with his fans and other aspiring streamers. He often invites other new streamers to be part of his Twitch stream given them exposure to his hundreds of thousands of fans. There are roughly 20 casino streamers who are Xposers. For viewers, this also means you get a lot more entertainment around the clock. And for Cody, he gets to also spend more time with his family. It’s a win win situation for everyone.

Xposed, aka Cody Burnett, is completely open about his life. Born on 7th June, 1996 in Ontario, Canada, Cody started off with Call of Duty 4 back when he was only 8. Shortly after turning of age, he started streaming as well, with slots and other casino games quickly added to his repertoire. He’s into real life sports as much as he’s into e-sports. He’s an avid hockey player and also enjoys baseball.

Although in the beginning, no one knew where gaming and streaming would take him, Shania, his girlfriend has been supportive all the way and now they’re engaged. He’s a proud young father and often shows off pics of him, his girlfriend and their baby on Instagram.

Cody Burnett knows how to keep his fans engaged. Not only does he stream, but you will find Xposed all over social media so it’s easy to see what he’s up to. From news about his streams, to his forays in CoD, to sweet family pics, there’s a bit of everything all mixed in.

With roughly 450,000 followers on Twitch, this is Xposed homebase. This is of course the place to be to watch Xposed streams, but as with all live streams, it’s also a great channel to chat with the man himself and other like-minded viewers. Whenever there’s a big win, the chat explodes with exhilaration, along with Cody himself.

TikTok is of course of the newest and hottest social media platforms. While many streamers, including Roshtein, aren’t using it, it’s a completely different story with Xposed. Xposed is very active on TikTok, often posting videos of his big wins, funny moments and so much more. Of course, the main focus is still on gambling. In any case, Xposed’s TikTok is definitely worth checking out!

©xposed | Youtube may not be the best network for casino streamers. Nevertheless Xposed has nearle 500k views on his most polular videos.

Instagram is where Cody Burnett shows that personal life and professional life need not be at odds. Tons of pics of him and his girlfriend here. Their son was born in 2020, and there’s been plenty of photos from Xposed sharing their bundle of joy with the rest of the world. Other than these personal pics, Xposed will also use Instagram to share upcoming news about his streams with his fans. He has roughly 62,000 followers on this channel.

Xposed has been on Twitter since 2013 and now has around 100k followers. His tweets are mostly about gaming and his streams, and he is very active on this channel. There are always lots of comments and it’s a buzzing community in itself.

Xposed isn’t just good at playing games, but his open personality is refreshing. He’s very much a normal Canadian guy who loves his family and hockey. And games of course. He’s been playing computer games since he was a kid, and moving onto slots and casino stream was just the next step.

With big wins, you’ll see Xposed erupt with joy. It carries well over into the live chat window too. If you’re looking for great entertainment with others who enjoy the thrill of slots, Xposed on Twitch should be on your radar.